SOLAR INSTALLATION IN SOME UNUSUAL PLACES

Solar power now accounts for almost a third of global renewable energy capacity, according to International Renewable Energy Agency (IRENA). From rooftops to carports, from ground-mount to several water bodies, an increasing array of innovative sites are being used to build solar power facilities.

It’s estimated that Germany alone could house around 20 gigawatts of solar energy on the water – enough to keep the lights on for approximately 15 million homes. Floating systems are also regarded as sustainable and are quicker to install.

With governments around the world pledging to reach net-zero emission targets in the decades to come, the race is on to significantly boost renewable energy capacity.

The race for space

Solar energy is clean but often takes up huge tracts of land. However, solar power is no longer limited to just vast stretches of arid land or rooftops. After rooftop, carport, flaotovoltaics, agrivoltaic now let us introduce you to another unusual instance of solar installation:

In recent years, the focus of the solar energy market has shifted from large utility projects to smaller projects that make more innovative use of space. India as well as California’s Canal-top solar, bicycle lane covered with solar panels in South Korea, are some prime examples.

Over 4,400 PV panels spanning across Blackfriars Bridge located across the river Thames in London, was opened in January 2014.  It is the largest solar array in London. The incorporation of PV cells at Blackfriars Station is a flagship project, creating the ‘world’s first solar bridge’ and demonstrating the benefits of solar power and renewables on Britain’s rail network.

The bridge is the largest and only the second of its kind in the world. The world’s first solar bridge is the Kurilpa Footbridge, built in 2009 in Brisbane, Australia.

Construction of the solar bridge

The upgrade to Blackfriars station not only provides a better travel experience for passengers and makes London’s South Bank and other tourist destinations more accessible, but also provides a sustainable station through the integration of the network of the largest photovoltaic (PV) roof in the UK. 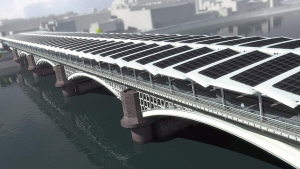 This rooftop location, with no buildings covering its location above the Thames, provided an ideal location for solar power. The panels, supplied by Panasonic, are designed to be lightweight to avoid overloading the bridge.

This work is one of the most complicated so far, which has put the panels in order in the last two years, stopping to reduce the impact on the resort during the 2012 Olympic Games.

The roof provides 1.058MW of renewable electricity at its peak, up to 50% of the station’s energy, powering lighting, ticket machines, staff accommodation, and office facilities with any excess electricity being fed back into the National Grid.

The energy generated by the solar panels is further reducing carbon dioxide emissions by 550 tons a year, equivalent to flying from London Heathrow to Paris (return per passenger trip) 4508 times. The bridge will also act as a major advertisement for London’s efforts to become a sustainable city, with tourists and workers viewing the panels as they enter the capital. 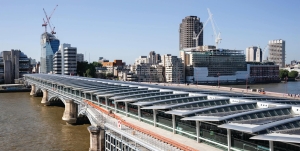 “Network Rail has invested funds into the project is a great sign for the solar industry,” said Suzanna Lashford, head of commercial sales for Solarcentury, the company that did the installation work. “They’re an old English institution and they’re looking to the future to make investments into non-core technologies for the business, and that’s a great statement that other large corporations in the country can start realizing.”