The Golden State, which is on the road to having a carbon-free power grid within 25 years, got a short glimpse of that possibility earlier this month. 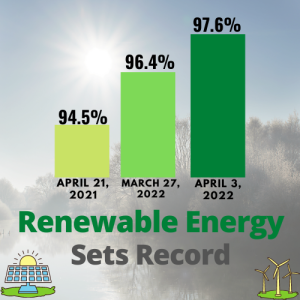 On April 3, 2022, California’s main grid ran on more than 97% renewable energy. At 3:39 p.m. when the grid was at its peak, it broke the previous record of 96.4% set a week earlier on March 27. Before that, the grid’s record was set a year ago at 94.5%, according to California Independent System Operator (CAISO) statement.

“While these all-time highs are for a brief time, they solidly demonstrate the advances being made to reliably achieve California’s clean energy goals,” said California ISO President and CEO Elliot Mainzer.

While hitting the new renewable record is remarkable, the state has found itself scrambling for power supplies during the past two summers. The reason is it has added more intermittent sources and retired natural-gas plants for environmental reasons.  Although solar and tidal power are fairly predictable, the analysis predicts that more peaks could be reached later in April.

Power production from the sun and wind typically peak in summer. Mild temperatures and the angle of the sun allow an extended period of strong solar production. 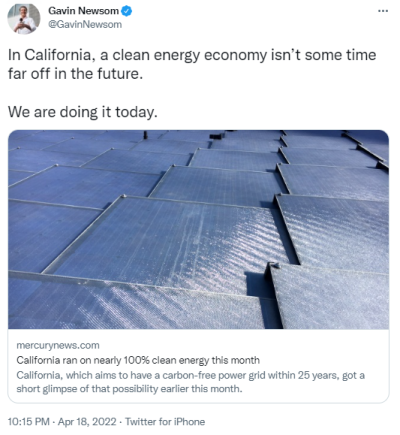 California has aggressively boosted solar and wind energy production in recent years, with the hope of generating half its energy from renewable sources by 2025. Lawmakers in the state continue to craft legislation that will speed up the transition to clean energy, with more than two dozen bills currently under consideration in the Legislature.

It is worth mentioning that the number dipped slightly in 2020 amid a major drought in the state impacting hydroelectric generation. The delay in renewable energy projects caused by the pandemic Covid-19 is another big reason for the dip.

“Achieving 100% clean electricity by 2045 is not only a bold pursuit but a wise one,” said CPUC President Marybel Batjer. “Such action is required to avoid the worst impacts and costs of climate change and to ensure the delivery of safe, affordable, reliable and clean power to all Californians.”

In addition to using more solar and wind resources, the ISO also plans to add more renewable energy storage to the system by June of this year. Storage helps ensure solar and wind energy can be used at any time during the day.

In 2021, California was second in the nation, after Texas, in total electricity generation from renewable resources, including generation from small-scale solar PV generation,” says the U.S. Energy Information Agency. “California is the nation’s top producer of electricity from solar, geothermal, and biomass resources. The state is also the nation’s fourth-largest producer of electricity from conventional hydroelectric power — after Washington, Oregon, and New York — and is sixth-largest from wind energy.

Renewable sources of energy are growing nationwide. In late March, the U.S. marked another significant milestone when electricity generated by wind turbines was the second-highest source in the country over a 24-hour period, according to the Energy Information Agency.

The challenge ahead for California and the U.S. is to make sure that milestones for renewable-power generation continue to fall on a regular basis. Ashutosh Bhagwat, Chair of the California Independent System Operator Board of Governors, sees last week’s record as a promising sign.

Projects worldwide are developing new ways to utilize solar panels and move away from dirty fossil fuels. These moments help crystallize the vision of the modern, efficient and sustainable grid of the future.

Now it is your time to shrink your utility bills. Get more energy independence. Make an investment that not only pays you back but also gives you a sense of doing something about climate change. Think Solar! Think Staten!!  Dial +1 (408) 780-2889.