Green roofs are not a new invention. For a long time, humans have been endeavoring to integrate plants into their architecture. As more and more cities all over the world trying to greenify their grey tops, interest in green roofs has significantly enhanced.

An opportunity, not conflict

There is a general misconception that a roof can either have a green roof or solar panels however, combining the two technologies is common in many countries in the World. Places like Singapore, Switzerland, Germany, and Canada lead the way in the approach.

Going through this article, you may conclude that both work well with each other, contrary to the popular belief that two are mutually exclusive.

In a nutshell, a green roof is a layer of vegetation on top of a building, ranging from a thin coating of grass to full-blown gardens.  It is not hard to tell that a garden on top of a building looks better than brick or metal. On top of it, plants remove harmful particulates from the air around them, and emit oxygen, whereas metal and brick roofs cannot do this.

Essentially, green roofs help to reverse the Urban Heat Island Effect, which describes the process of buildings and roads trapping heat (You may already face extensive heatwaves in California these days). As tarmac, brick, and metal trap heat, it spikes the demand for air conditioning, which means more energy consumption, which ultimately means a higher electricity bill.

What if your roof can help you to reduce both of the above?

Green roofs are wonderful additions to any building, wherever possible. But it comes with additional installation and maintenance costs. If money is not a huge barrier[Finance Available], having a garden with solar panels on your roof (whether home or office building) is a bit of a no-brainer. 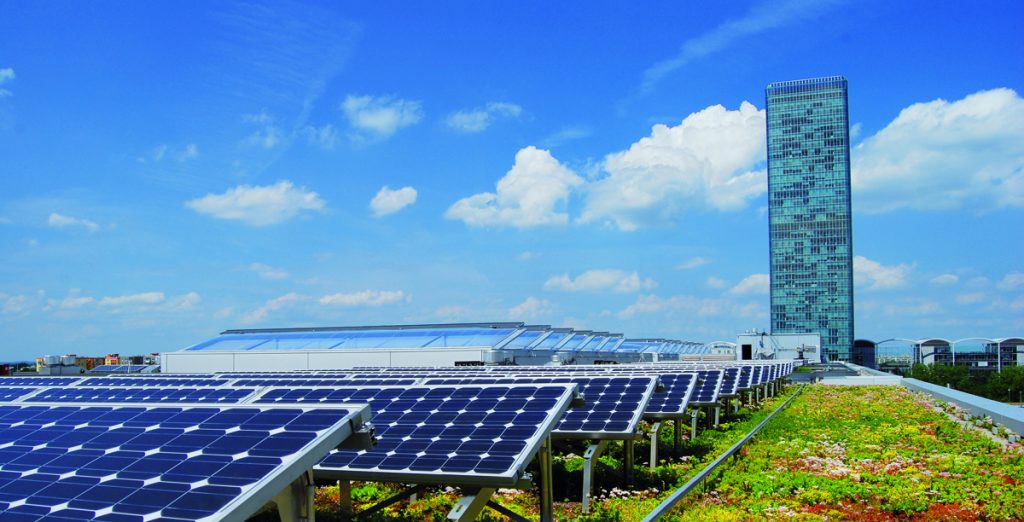 You may be amazed to know but solar panels and vegetation can coexist on the same rooftop. Moreover, a living green roof can not only help improve the appearance of your roof, but it will also increase the panel’s working efficiency. It’s a symbiotic win-win. A 2017 study by the University of Illinois came to support our claim.

A similar and most recent study was conducted in Barangaroo, Sydney where two similar solar cladded roofs were chosen for the experiment. The only difference is that one is bare beneath its panels and the other is decked with native grasses and plants.

The study was led by Peter Irga from the University of Technology, Sydney, and has run for over eight months. However, both roofs generated substantial quantities of solar energy over the period they were studied, but it was revealed that the conventional roof yielded 59.5 MWh, while the green roof produced 69 MWh.

“Despite the similarities in build and location, the effect of urban geometry on solar irradiance on each rooftop….. the green roofs produced an average energy output that was greater than the conventional roof by ~ 6 %. Before, and after these hours, the influence of urban geometry confounds the reportable efficiencies (-3.6 to 16 %)” the study read.”

In short, the solar panels on the green roof were on average 3.63% more efficient, producing an average daily output 13% greater than the conventional roof. This efficiency boost is thought to stem from the fact the green roof remained far cooler than the traditional concrete one during the day, meaning the panels did not overheat and therefore underperform. In some instances, the green roof was as much as 20°C cooler.

If you are under any financial dilemma and weighing up the choice between a green roof and solar panels, and you’re obliged to pick just one, we strongly recommend solar panels.

You may see a conflict of interest here, also they are more expensive at the outset. But Solar PV systems have a much quicker ROI than a green roof. Furthermore, they have a much bigger effect on CO2 emission reduction, lower maintenance costs, and a huge impact on your energy bills.

Should you combine the two (Solar Panels and Green Roofs)?

The question is less about ‘should’ and more about ‘can’. Yes, the benefits of having both on your roof are clear – but naturally, you’ll have to pay for both.

Such simple actions to improve your building’s both direct and ambient cooling alongside photovoltaic panels make solar energy not only carbon-free but also benefit the surrounding area’s air quality.