Carports and parking lots have long been underutilized assets. Property owners now have the opportunity to provide a better carport and parking lot service as well as generate electricity that may be used or sold.

Solar panels, tall enough to park an RV underneath, stand on steel trusses above the lot, providing a bit of shelter and shade. Not only does the property get cheap, clean solar energy but its occupants, visitors, and owners also have cooler cars on hot summer days and don’t have to spend time scraping their cars free of snow in 20-degree weather in winters.

Didn’t it strike that Solar Carports are as such a useful system that it seems strange why every parking lot doesn’t have solar panels over it?

You may aware that each installation of solar panels has a different calculus. Whether it’s on a roof, on the ground, or over a parking lot. The owners of big parking lots may not site solar there for a number of reasons, including both price and inconvenience.

However, some solar experts think it’s possible that a swell of interest in sustainability could bring more solar parking arrays in the coming years.

The upfront costs of solar

The environmental and economic benefits of solar are bigger than ever, and organizations can now share in the savings by installing a solar covering over their parking lots.

Michigan State University estimated the parking lot panels (located over five lots) would save $10 million over 25 years. The university gets the electricity from the panels under a power purchase agreement, which means it doesn’t own the panels but agrees to purchase the power. It saves by getting the power for a lower price than from an alternative source.

“A carport is roughly 40% more expensive compared to a ground mount system,” said Tim Powers, a research and policy associate for Inovateus Solar, the company that built Michigan State’s system. It costs more because of extra materials (it takes taller, stronger structures to get solar panels that far off the ground), extra labor (it takes longer to build), and extra engineering costs, he said.

If the only motivation is getting solar for the cheapest possible price, carports aren’t the way to go. But there are other reasons an institution might adopt solar in their parking lots. 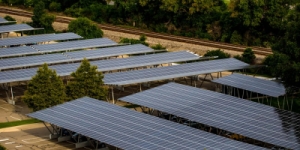 Michigan State’s carports have won national and state awards, and account for 5% of the energy consumption on campus — a step towards the university’s sustainability goals and a nice round of good publicity.

Big Stores: A lot of Parking Spaces and a lot of Clean Energy

A solar carport covering an average Walmart parking lot would have a capacity of about 3.1MW, said Joshua Pearce, a professor of Electrical and Computer Engineering at Western University in London, Ontario.

Pearce modeled the viability of solar carports at big box stores, choosing Walmart for its ubiquity. The chain has also made public commitments to sustainability and is one of the leading corporations in solar capacity installed.

Walmart says it has 600 onsite renewable energy installations but didn’t share information about planned or installed parking lot solar canopies. It has reportedly installed at least seven throughout California.

According to a study published in Nature, large-scale solar in the US is largely sited outside of cities. Fifty one percent of it is installed in deserts, 33% is on farmland and 2.5% is in urban areas.

Land use decisions are often fraught. Putting solar in deserts raises cultural and ecological concerns. Rural solar farms have stirred debates. Michigan State’s installation kept 45 acres of agricultural land in production, a fact Michigan State called out in promoting one of the several awards it won for the array.

Parking lots, on the other hand, are mainly good for one thing — parking — and solar canopies arguably improve that experience.

Well, it is hard to project but one thing is clear that is Super Sustainable. Rather than taking up new land or additional property, why not take an existing space and go solar?”