While the debate between solar energy and nuclear energy continues on Earth, some people are looking to the stars.

As humanity turns its attention to Mars, with manned missions tipped to launch by the 2030s, the question of how we might power those missions is becoming ever more important.

While the main source of power for NASA’s Mars rovers comes from a solar array, most scientists have assumed that to power a manned mission would require a more reliable and constant power source – in this case nuclear energy, powered by a miniaturized nuclear fission device. That’s because solar energy isn’t being produced at night, or during a dense dust storm.

But high efficiency, lightweight, and flexibility of the latest solar cell technology means photovoltaics could provide all the power needed for an extended mission to Mars, or even a permanent settlement there, according to a new analysis by scientists at the University of California, Berkeley. 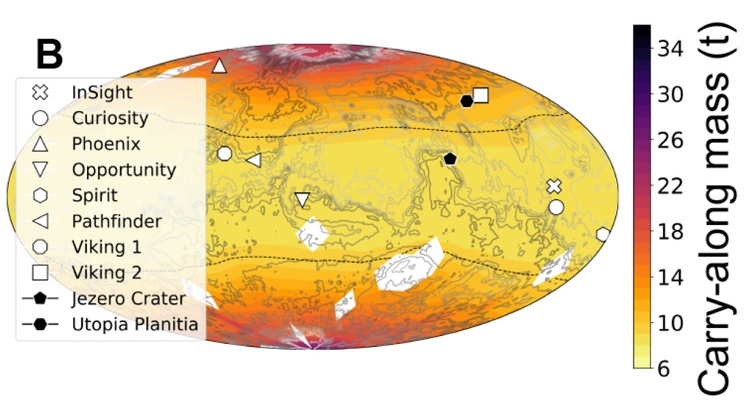 Astronauts traveling to Mars will need to minimize the weight of the power system they take with them from Earth. Photovoltaics would be the best choice if their planned settlement site is in the yellow area on this flattened map of Mars. Also shown are the sites of previous missions that have landed on Mars, including Jezero Crater (upper right), which NASA’s rover Perseverance is now exploring. (Image credit: Anthony Abel and Aaron Berliner, UC Berkeley)

Further, their analysis found that for settlement sites over nearly half the Martian surface, solar is comparable or better than nuclear, if you consider the weight of the solar panels and their efficiency.

“Photovoltaic energy generation coupled to certain energy storage configurations in molecular hydrogen outperforms nuclear fusion reactors over 50% of the planet’s surface, mainly within those regions around the equatorial band, which is in fairly sharp contrast to what has been proposed over and over again in the literature, which is that it will be nuclear power,” said UC Berkeley bioengineering doctoral student Aaron Berliner, one of two first authors of the paper.

The new study, published this week in the journal Frontiers in Astronomy and Space Sciences, uses a systems approach to actually compare these two technologies (solar & nuclear) head-to-head for a six-person extended mission to Mars involving a 480-day stay on the planet’s surface before returning to Earth. That is the most likely scenario for a mission that reduces the transit time between the two planets and extends time on the surface beyond a 30-day window.

Anthony Abel, co-first author and a graduate student in the Department of Chemical and Biomolecular Engineering said that “photovoltaics are now highly efficient at converting sunlight into electricity, though the best performers are still expensive. The most crucial new innovation, however, is a lightweight and flexible solar panel, which makes storage on the outbound rocket easier and the cost of transport less”.

Weighing up the options

In a first-of-its-kind investigation, researchers from the University of California Berkeley, US, compared various methods for generating power on the red planet.

When they crunched the numbers, they found that a photovoltaic array that uses compressed hydrogen for energy storage could be a more effective power source across at least half of the planet, when you consider the weight of the solar panels and their efficiency.

The key is the hydrogen gas, which can store the energy to power a Mars base at night or during a dust storm, making the array just as reliable as a fission device and with a reduced mass – at least closer to the equator. Nearer

The study gives a new perspective on Mars colonization and provides a road map for deciding which other technologies to deploy when planning manned missions to other planets or moons. With Solar Panels, the future is looking bright.